Jefferson hosts TEDx event for speakers to share their voice 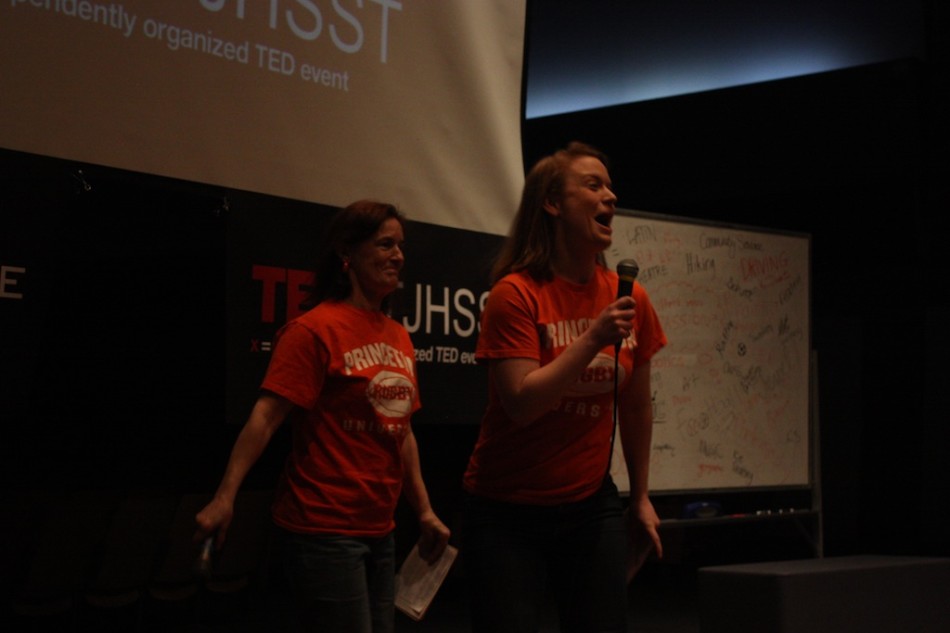 Jackie Bello, a Jefferson alumna, speaks of her days at Jefferson as an overachiever.

On April 25, Jefferson hosted an independently organized Technology, Entertainment and Design event (TEDx) where students and guest speakers alike could share their ideas formally in front of an audience. The event ran during sixth, seventh and eighth period, with different student audiences and speakers in each block.

Sophomore Ally Scholle shared her passion for the language and history of Latin as she referred to the ancient stories of Cleopatra, Caesar and Cicero. In her presentation, “Vivat lingua Latina: How a dead language can bring communities alive,” Scholle emphasized the importance of Latin as the connection to the past and noted her way of communicating with the present using the feelings of empathy she learned by studying the ancients. Scholle presented during the seventh period block of the TEDx event.

Also in the seventh period block, Jefferson alumna Alyson Yee presented her love of cheese, French and biology through her presentation, “What French cheese can teach us about American culture.” The coalition of her interests into a research study on cheese microbiology earned her a research grant from Fulbright and a glimpse into the contrasting research environments of much-relaxed France and strict United States.

Bruce Alberts, the former Editor-In-Chief of “Science” and a current professor at University of California, San Francisco (UCSF), shared his vision of promoting “scientific temper,” or the skill to perceive science with logic, innovation and enthusiasm in the presentation, “The importance of science for the world.” He hoped for a developing education in the sciences by encouraging students active participation and logical problem-solving skills.

Judy Bello, an English teacher at Jefferson and her daughter, Jackie Bello, a Jefferson alumna, presented their definition of overachievement in the presentation, “I Used to Live my Life at Breakneck Speed… Until I Broke my Neck.” By referencing Jackie Bello’s neck injury after a rigorous match in rugby during her college years, they emphasized the significance of “quality over quantity,” the setbacks of perfection and the incredible potential of people.

As the last presentation of the seventh period block speakers, seniors Sarah Quettawala and Tarun Prabhala spoke about their experience organizing Namaste’s International Night (I-Nite) in 2014. In the presentation, “I-Nite 2014: The road to staging the unthinkable,” Quettawala and Prabhala, the officers of Namaste, recounted the various problems they faced in the preparation for this year’s I-Nite and the steps they took to solve them. Quettawala and Prabhala attributed the successful show to the vision for overachievement that the Jefferson community shared.

Some other presentations at the TEDx event, including one by juniors Pegah Moradi and Shadin Ahmed, focused primarily about a passion, rather than the theme of the talk, which was “overachievement.” Moradi and Ahmed shared their love for spoken word poetry, as well as reciting a couple of poems for the audience’s enjoyment. Both speakers encouraged the audience to share their feelings during the poetry recitations, and to not be afraid to cheer or laugh during the poetry.

During eighth period A, Kate Lewis, a teacher at Jefferson, gave a presentation about what the theme “overachievement” meant to her. She talked about how the term “overachievement” can have either a positive or a negative connotation, and that Jefferson students rarely think about ways overachieving might not necessarily be the best option. Lewis did talk about the benefits of overachievement, when she told the audience about her experience getting neck surgery.