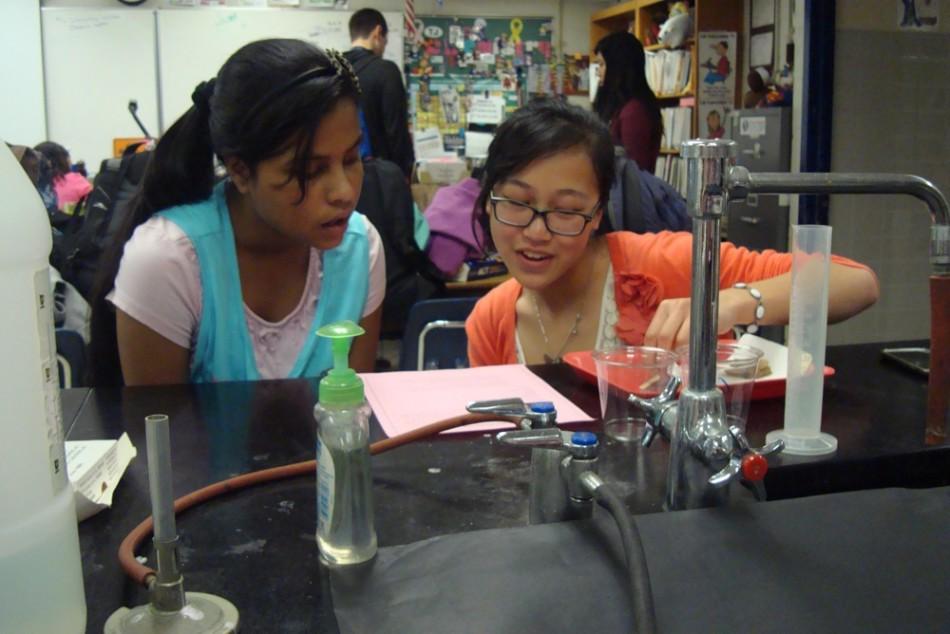 Jefferson students engaged in an osmosis experiment with their partners from Weyanoke Elementary School on April 11.

Amidst the large crowd of students hurrying to get to their first eighth period clubs, a small group of elementary school girls are welcomed by their Jefferson “buddies”, exchanging bright smiles and greetings as they situate themselves in the chemistry laboratory.

The elementary students are from Jefferson’s nearby Weyanoke Elementary School, meeting with Women In Science and Engineeering (WISE), an eighth period club that meets held Friday which aims to increase Science, Technology, Engineering and Mathematics (STEM) education in women. Each Weyanoke student is paired with a Jefferson student, who acts as her mentor throughout the year.

“I know how powerful it is to have someone to look up to,” junior Anna Tsutsui said. “It was actually my middle school science teacher who inspired me to pursue the sciences.”

The experiments that the club conducts range from a variety of science topics. On April 11, the students conducted their latest experiment, in which they studied osmosis through simulating the process using potato cells.

The club hopes to share a new light in female participation in STEM studies by establishing an amicable relationship between the Weyanoke and Jefferson partners. Throughout the year, the club aims to resolve the ever-continuing lack of STEM education and engagement in women.

“What I would really like to see these girls take away from their experience in WISE are that one, science can be interesting, and two, it’s okay to be a girl and like science,” Tsutsui said.