Threshold nears the end of production 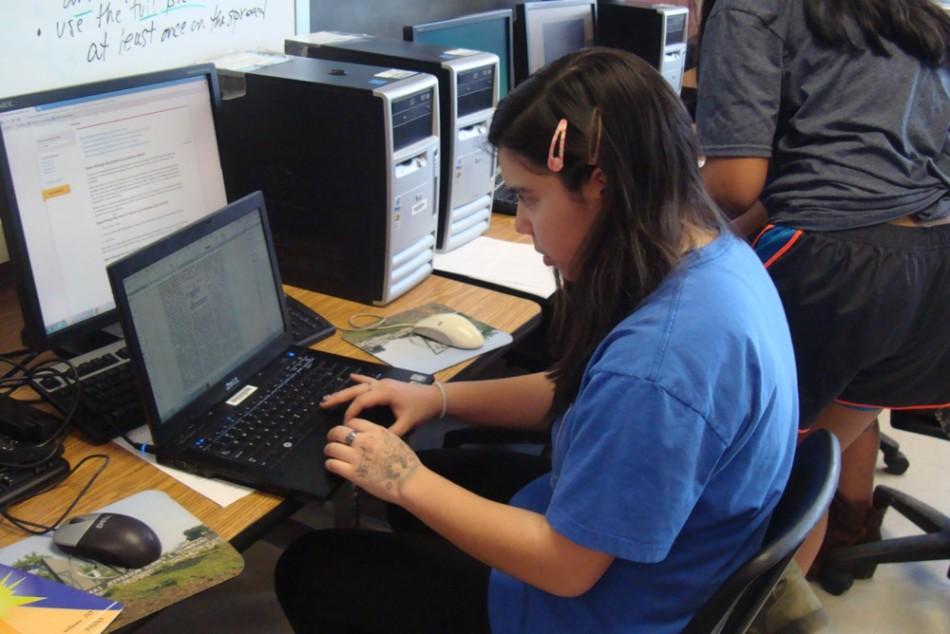 Sophomore Gabriela Huckabee works on her spread that will be published in the upcoming Threshold magazine.

Scurrying around the small computer lab, the editors of Threshold carefully scanned the colorfully adorned spreads of the upcoming addition of Jefferson’s annual literary magazine, which is currently nearing the end of its production session.

Due to the snow days and late deadline for submissions, the production for the magazine initiated later than that of the previous years. Students gathered during eighth period, lunch and after school to finish their spreads, in which each incoming member was paired with an editor to work on the layout designs.

“Even though we had less production time due to snow days, I think the spreads for this year’s Threshold are coming along pretty well,” senior Saehee Jung, the editor of Threshold, said.

Threshold, one of the various types of publications provided at Jefferson, selects literary works written by Jefferson students and publishes the pieces into a magazine, with each page designed by the staff members.

Through the production process, students have the opportunity to become familiarized with InDesign and Photoshop, which are essential software tools for designing spreads. Since many students are not acquainted with the tools, the editors usually take the role of checking their progress and guiding the direction of their designs.

“I oversee the process of selecting the arts and making of spreads with the Editor-in-Chief,” Jung said. “I enjoy watching the staff and editors learn how to work with InDesign and come up with creative ideas.”

As the production process is planned to conclude shortly after the end of spring break, the editors and staff hope to produce another outstanding compilation of literary works.

“It is exciting to see everyone’s reactions when the magazine comes out,” junior Sanjoli Agarwal said. “Seeing the authors’, poets’ and artists’ faces when they see their work published and shared with their friends is worth the production process we go through to make everything perfect.”