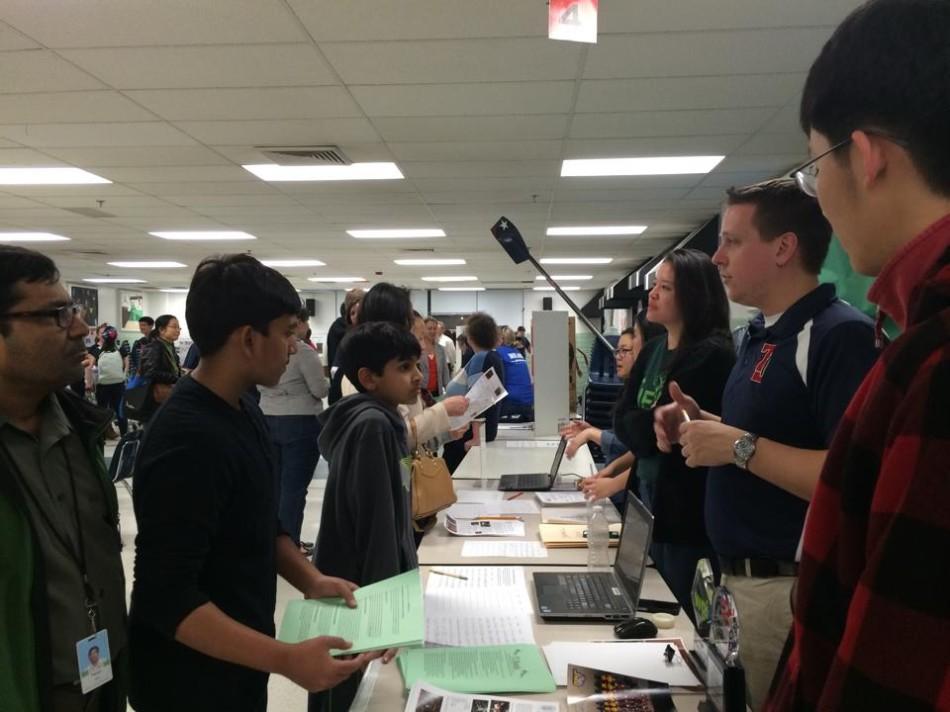 Incoming freshmen meet with representatives from Jefferson's band program during the open house held at Luther Jackson Middle School on the evening of April 8.

After yet another grueling year of Jefferson’s admissions process, successful applicants received offers of admission this past weekend on April 4, after being delayed due to this winter’s weather.  Additionally, on April 8, the demographics of both the applicants and the admitted students were released, showing the continuation of certain trends.

For the class of 2018, 2,900 students sought admission.  Of these, 487 were admitted for an overall admission rate of 17 percent, which is similar to those of years past.  The incoming class is tentatively made up of around 60 percent males and 40 percent females.  Racially, the admitted students are divided into 24 percent white, 2 percent black, 2 percent Hispanic, 66 percent Asian and 6 percent other or multiple races.

“I’m so excited for the new freshman class to start joining some of our sports teams and clubs at TJ, though it’s a bit shocking that two thirds of them are Asian,” junior Teja Sathi said. “Did any of the controversy surrounding the admittance of minorities find its way into the actual TJ admission process?”

Compared to years past, the data is following a constant trend of being dissimilar to the demographics of the areas from which Jefferson draws students.  Last year’s admitted students were of similar racial demographics, but were comprised of 58 percent males and 42 percent females.

However, the data shows a striking difference from multiple years ago. For the class of 2013, the gender makeup was 57 percent male and 44 percent female.  Additionally, the class was 36 percent white and 54 percent Asian. For Jefferson’s class of 2010, the data was even more dissimilar.  The class’s admitted students were 51 percent male, and 49 percent female.  Racially, it was 50 percent white, 4 percent Hispanic, 2 percent black, 38 percent Asian and 7 percent multiracial or other.

“With male dominated computer classes, the numbers of males admitted to each class sways the interest of female students in similar fields,” senior Emma Gee said. “For this reason, the admissions officers should try to even out the genders so that one does not overpower the other in the classroom.”

“I think that all races should be considered with equal merit because race shouldn’t make a difference in your application,” sophomore Eli Lifland said. “The applications should be blind to petty things like race because that doesn’t change your intelligence or application.”

Also to be noted, private school students had a higher admission rate than that of public school applicants, and those who had a reduced or waived fee were accepted at a rate of 2 percent.

While there is not a clear way to solve these overrepresented and underrepresented populations, the situation is likely to be addressed more over the coming years.

“I think we definitely need to work on including more minorities at TJ in the coming years,” freshman Anshu Sharma said. “I’m not sure how we can do this, but I’m sure the admissions process will find a way soon.”