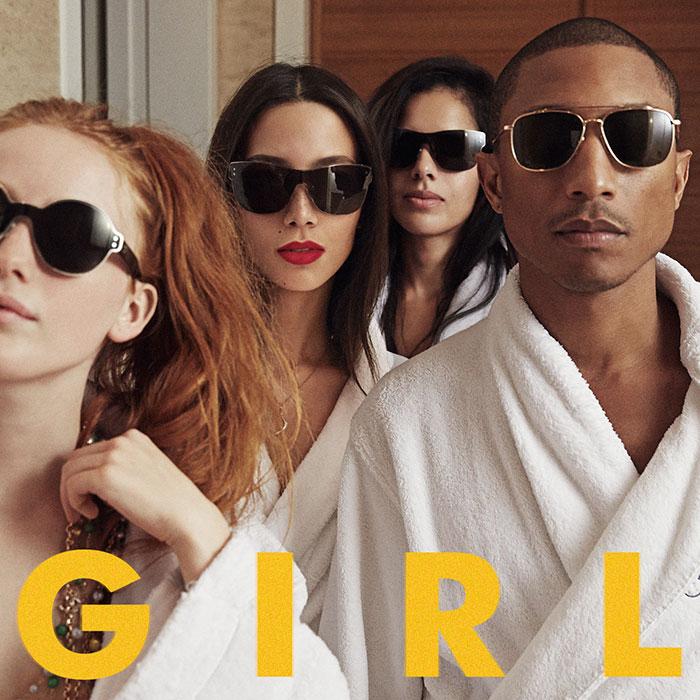 Singer and producer Pharrell Williams was on a roll in 2013, having been featured in two mega-hit songs, Robin Thicke’s controversial “Blurred Lines” and Daft Punk’s funky “Get Lucky.” He was also nominated for seven Grammy Awards and the Academy Award for Best Original Song for the “Despicable Me 2” soundtrack, “Happy.”

However, ready to continue the success in 2014, he returned to the music scene with the release of his second album, “G I R L,” on March 3. The album debuted at number two on the Billboards 200 chart.

Beginning with gorgeous cinematic introduction by an orchestra, “Marilyn Monroe” quickly metamorphosed to a groovy song, equipped with a beat punctuated by the same strings that introduced the album. The song drops names of famous women in history, including the eponymous Marilyn Monroe, Cleopatra and Joan of Arc, who are inferior to the “girl” of this song. However, the urgency found, especially with the strings, left me wanting more of the next tracks rather than remaining on this one.

Featuring Justin Timberlake, “Brand New” seemed more like a falsetto standoff between the two artists. However, the cheery song featured interesting background sounds that had me straining to listen to identify them all. According to Williams, the 1970s inspired “Hunter,” was written in the perspective of a woman and with its sexual connotations of being the predator, it’s interesting to see a male artist portraying a woman in this light, rather than the objects that many of his colleagues have done.

Containing the most sexually explicit lyrics, which should be avoided by those not comfortable by the language, “Gush” is still a smooth and jazzy song, featuring a bit of Williams’s rapping. Directly contrasting in its innocence, especially since it was featured in “Despicable Me 2,” “Happy” celebrates life. It is also currently sitting at number one on the Hot 100 of the Billboards Charts.

Williams also brought Miley Cyrus, though uncredited, to his album in “Come Get It Bae” as she shouted “hey!” for the beat and sang the chorus. Filled with handclaps and a fun bass beat, the song is exciting and is not a bad way to showcase Cyrus. “Gust of Wind” features the robots of Daft Punk, utilizing their futuristic sounds for the pre-chorus. The song is an interesting mix of sounds from the past, channeling the groove of the 1970s, and the future, with the robotic elements from Daft Punk.

“Lost Queen” is the best song of the album, the most stripped-down of all the songs, featuring a simplistic tribal beat and harmonies that are pleasing to the ear. A bonus point also goes for the lack of his soaring falsetto. In addition, a gift found within “Lost Queen” is “Freq,” the hidden track, featuring singer JoJo. The song is smooth and perfect for showcasing the strong artists.

Another one of my top favorites of the album, “Know Who You Are,” featuring Alicia Keys, empowers women, with lyrics and Keys’ soulful delivery such as “Say your name, I pledge, to live life, on the edge/Want you to know, I see, the power, is in me/No more, acquiesce, standin’ up, with no stress/Will do, what I need, ’til every woman on the Earth is free.” Their voices mesh so well with each other, I’m hoping to see more collaboration between the singers.

Feel-good “It Girl,” filled with Williams’ falsetto, is definitely not the strongest song but it’s a solid way to close “G I R L.”

Overall, though I expected an album of more addicting radio hits, I’m pleased with the way Williams avoided objectifying women. I didn’t find myself really loving his songs, as I found his falsetto grating at times and none of the songs really stuck with me at the end, but I did enjoy listening to them. Though the concept of the album was limited to his love and desire for a girl, his songs are definitely a funky delight and quintessentially Williams, a good introduction to those new to the singer and producer.