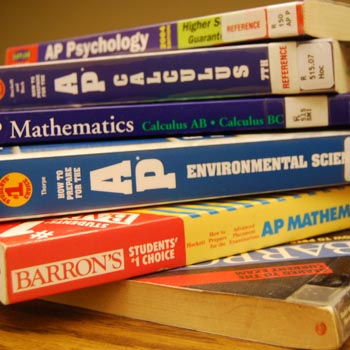 Students prepare for their Advanced Placement tests through a variety of preparation books and study materials.

Many students were eagerly awaiting their chance to practice for their upcoming Advanced Placement (AP) exams, including the AP United States History and AP Biology examinations, on Saturday, March 29. This valuable practice opportunity would have allowed students across all grades at Jefferson to be better prepared for their upcoming tests in May. This practice opportunity, however, was canceled on March 28 due to a variety of conflicts arising at the last minute. And while the Class of 2015 assured all students that they would receive a full refund for their payments, many of them are curious as to why this event was canceled at all.

“We had a lot of people asking for this event, but there are so many other events this weekend such as PilotDC, a Robotics Competitions, and other commitments that will cause many students to be too tired take these tests,” junior Anant Das, the Class of 2015 president, said. “We became aware of this predicament and decided to cancel the exams so that these students would not be forced to miss this practice opportunity.”

In addition, the class of 2015 also realized that since there had been practice SAT Subject Tests the previous weekend, which 100 students attended, the attendance for this test would not be as high as many of them would not want to take such taxing exams two weekends in a row. Understanding that if they would delay the event to another weekend more students would attend, the sponsors of the event decided to cancel the event for now.

“I attended the Class of 2015 sponsored SAT Subject Tests last weekend and it was an incredibly helpful opportunity for me,” junior Shirley Burt said. “I was going to also practice for my upcoming AP exams this weekend, but I didn’t think I would be able to do well on them if I was already so tired from this stressful week and the tests I took last week. I’m glad they canceled the exams for now and hopefully they will reschedule them to a better time for all of us.”

Moreover, the number of exams that would have been provided at this years AP practice tests is fairly limited and as such many students who were studying European History or Chemistry would not have had the chance to practice their exams. They class council hopes that by canceling the exams they will also have a chance to provide a wide-range of tests in the future including Physics and Calculus exams along with many others.

“Though this is an incredible opportunity to prepare for the upcoming AP exams in May, I was upset when some of the courses that I have tests in were not available to us for practice,” junior Arielle Ampeh said. “I hope that if they reschedule this event they will provide a broader variety of tests so that all of us will be better prepared for our exams at the end of this school year.”