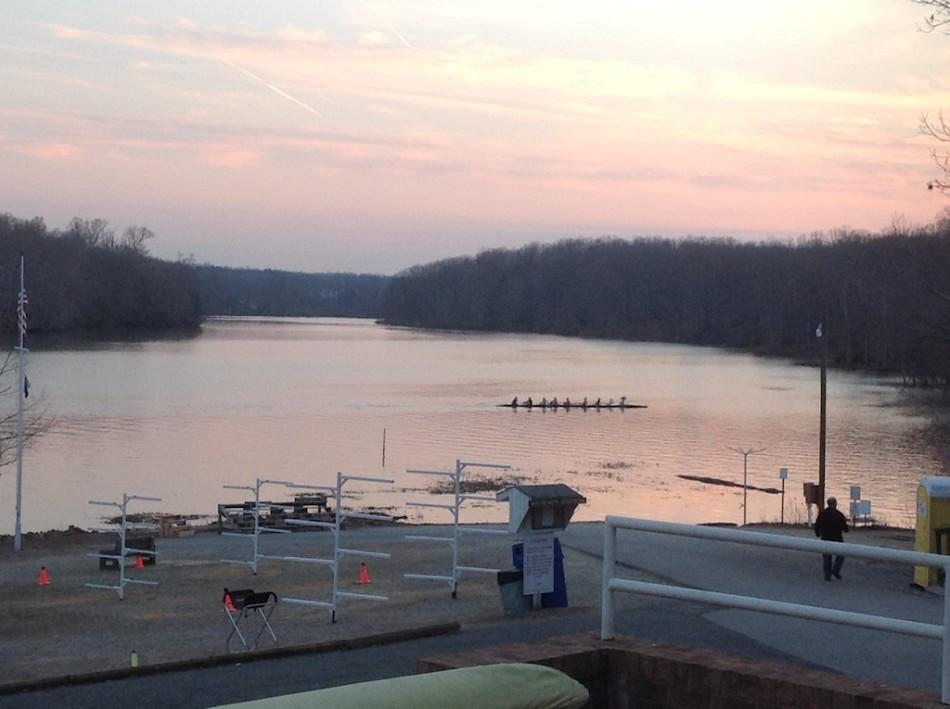 Just days before the Polar Bear regatta, teams from around the area went out on the Occoquan river for crew practice.

The Jefferson crew team has trained long and hard in preparation for the season to start. After months of winter training and weeks of on-water practice, Jefferson’s rowers had the chance to gather at Sandy Run Regional Park on March 22 in order to compete in the annual Polar Bear regatta.

Called the Polar Bear regatta because of its earlier timing in the spring, the regatta is the first race of the season for many rowers in around the area. Of the Jefferson crew team, only the women’s and men’s upper boats raced for the first time in competition season. The freshmen and novice boats will begin their season at the next regatta on March 29.

“My favorite part of the race was during the middle when everyone was really rowing together,” senior Kinsey Moser, a coxswain for Jefferson crew, said. “You could feel how fast the boat was moving.”

“My boat placed third,” sophomore Lowrey Peyton, a rower for Jefferson crew, said. “However, we were able to use the new skills we had learned in practice, and the race felt great.”

Just prior to race day, members of the crew team practiced starts in preparation for the regatta. Starts, essential to the first segment of a race, are short, fast strokes that get the boat moving at the very beginning of the race. In addition to the technique work, coaches had the rowers also work on something rather out of the ordinary before the Polar Bear regatta.

“We worked a lot on mental strength and focus, and these things really helped me stay concentrated and relaxed,” Peyton said. “I personally hope to improve my power and strength a little bit before the next regatta, and to use good rowing habits consistently.”

Even though the regatta has passed, however, the training is far from over. In order to prepare for the next regatta, the Regional Park regatta scheduled for March 29, rowers and coxswains must continue to train and condition throughout the week to ready themselves for the event. However, as there is only a week between regattas, most of the conditioning and training had taken place during the months of winter training.

“I think the Polar Bear regatta was a great start to the season, and we are working really well both as a team and as a boat,” Moser said. “Winter training was really challenging this year because of relocation outdoors due to construction and all of the issues with the weather, but overall people who went to winter training really improved and it definitely paid off.”