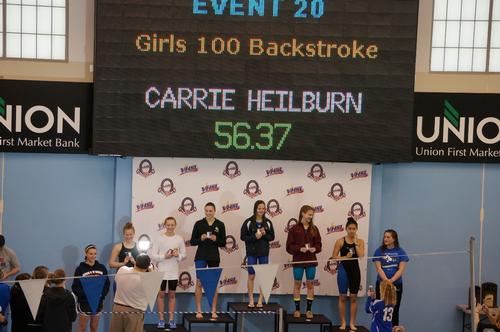 Photo courtesy of www.colonialathletics.org. Junior Carrie Heilbrun stands on the podium after winning 100 backstroke at the state conference.

Thomas Jefferson Swim and Dive (TJSD) dominated their competition this year, with both boys and girls winning Capitol Conference Championships and state runner-up titles. The dominance of the team can be attributed to the large number of star swimmers in the program. Luckily, most of them are underclassmen.

With the new conference change this year, eyes were on TJSD to dominate the conference. That, they did. Both boys and girls won the conference, celebrating with a jump into the pool.

“We all jumped in and pushed Ian Handerhan, our coach, in. It was amazing,” junior Taylor Quinn said. Quinn was one of the many swimmers who also qualified for the regional meet.

Regionals were a crucial step for the team if they wanted to compete at states. Aside from just winning the region, swimmers needed to qualify for the state meet if they wanted to have a shot at winning. Quinn’s relay consisted of juniors Sophie Bennett and Carrie Heilbrun and sophomore Charlie Lertlumprasert. Their goal was just to qualify for the state championship, but they ended up winning the region.

“We were just trying to make the cut so we could go to states, and we got first! It was the happiest moment of my life,” Quinn said.

Aside from these girls, the Colonials had a lot of success at regionals, which resulted in a championship for the boys and a runner-up finish for the girls.  Juniors Andrew Seliskar and Carrie Heilbrun both won the 200 freestyle. Later, Heilbrun also won the 100 freestyle. The boys won the 200 medley relay in addition to the girls’ win earlier. This allowed the Colonials to make a run at the State Championship.

Thanks to the standout performance from these swimmers, both the boys and the girls were the runners-up in the Virginia 5A State Championship. The team has their fair share of trophies to add to the case in the auditorium lobby. Next year, they are hoping to add even more.