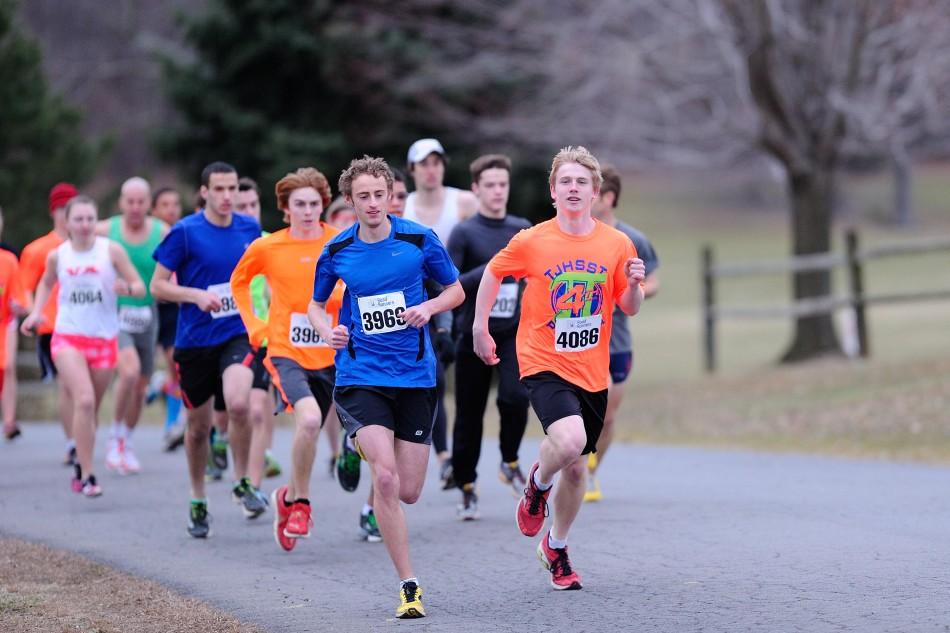 Juniors Remy Freire and Mitch Woodhouse lead the pack at the start of the Pi-MIler.

On the cool, partly cloudy morning of March 15, over 200 runners huddled at the starting line. When the starting horn shattered the morning silence at 9:00 a.m., hundreds of feet pounded rhythmically on the pavement as the runners fanned out onto the scenic course.

The classes of 2015 and 2016 held the fourth annual Pi-Miler 5K Run/Walk on March 15, and the race served as a fundraiser for graduation, prom and other class activities. A total of 205 runners finished the approximately 3.14159-mile race, which was held at Burke Lake Park. Participants ranged in age from three to 70, and while the majority of runners were from the Jefferson community and surrounding areas, some came from all over the East Coast.

“As treasurer of the class of 2016, I know that the Pi-Miler is an important fundraiser for both our class and the juniors, and we were successful on that front,” sophomore Spencer Weiss said.

Several members of the Jefferson cross country and track teams ran the race, and they took several of the places for overall men’s and women’s and their age group.

“I felt pretty solid while running, mostly because it was a sunny, cool and dry morning. Mother Nature could not have been more benevolent,” junior Remy Freire, who placed first in the 13-18 age group. “I felt pretty delicious about placing, because the giant apple pie I got to take home was remarkably scrumptious.”

Jefferson teachers and their family members also participated in the event. Math teacher Marianne Razzino has run three out of the four Pi-Milers, and she viewed the race as a positive experience.

“I usually run, especially on the weekends when I have more time, so participating in the Pi-Miler is a fun way to get my run in,” Razzino said. “I especially like that I am able to support whichever classes are sponsoring it, run with other teachers and students, and get a fun t-shirt too.”

The Pi-Miler course is traditionally laid out at Jefferson and in the surrounding neighborhoods. However, due to the construction at Jefferson, the classes of 2015 and 2016 were forced to move the race to Burke Lake Park at the last minute.

“Luckily, everyone was very flexible and the switch was not that bad. Most people actually preferred the lake park, myself included,” junior Nan Baker, the secretary of the class of 2015, said. “It was much more picturesque than a construction site and we did not have to worry about the police and crossing Braddock Road.”

At the end of the race, participants listened to announcements from the junior and sophomore officers and ate post-race bagels and fruit. The runners who placed in each age group were allowed to choose prizes that included pies, gift baskets and gift cards.

“It was a lot of fun to run a 5K with my friends and not have to race it,” freshman Clare Connally, who finished second in her age group, said. “I looking forward to running it next year because it is a super fun thing I do with all my friends.”