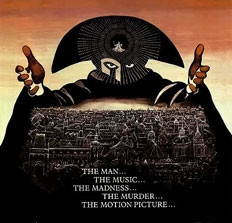 Students sit in room 208, attentively watching the figures dancing while opera music in the background crescendos. An Italian man, careful and poised, scans the room for a talent that has obsessed him since youth. Then, a throaty giggle from the so-called on-screen hero breaks the silence in the classroom

On March 11-12, students in English teacher Mike Miller and history teacher Anna Brown’s teamed humanities course (HUM) lunchtime viewings of the movie “Amadeus.” Directed by Milos Forman, the film is a 1984 drama adapted from Peter Shaffer’s stage play of the same title. In the movie, composer Antonio Salieri, a strong admirer of Wolfgang Amadeus Mozart, swells with jealousy at the light-hearted nature of the canonical composer and attempts to thwart him out of pride and envy.

“I think that ‘Amadeus’ shows that geniuses make art look easy and third-rate performers make it look hard,” sophomore Saurav Pattanayak said, referring to the often tense moments of interaction between Mozart and Salieri. “The movie shows the classical times and how influential Mozart was.”

The movie, which was framed from Salieri’s viewpoint, shows the true colours of the renowned child prodigy. It shed a darker light on the whimsical nature of Mozart as a person rather than an artist.

“It was extremely surprising. Having heard his music from a young age, I held the same thoughts as Salieri did before his first encounter with Mozart,” sophomore Will Ryu said. “I didn’t expect Mozart to be so vulgar or wild in behaviour.”

The first third of the film was played during the allotted time for HUM. But due to the 180-minute run time of the movie, a Brown opened viewings of the film to students during lunch. The storyline, although peppered with minor historical inaccuracies, has many references to the Renaissance and displays the power of an absolute monarch as taught during class.

“I thought it was actually a very interesting film especially because it was mostly factual,” Ryu said. “Usually I don’t like historical films, but this one managed to keep me awake and make me laugh numerous times.”