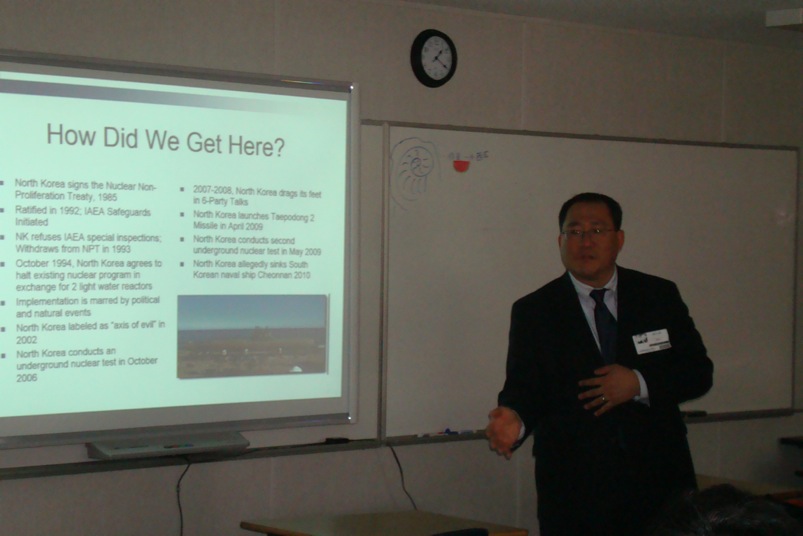 Jae Ku, the director of the U.S.-Korea Institute at the Johns Hopkins School of Advanced International Studies, spoke to students who attended HANK on March 16.

A photograph of a grandiose array of military soldiers coordinating every second of their steps was projected on to the whiteboard screen as students attentively observed and listened to Jae Ku, a special guest speaker for the eighth period club, Humanitarian Aid for North Korea (HANK), who spoke to students on March 12.

Ku, who is currently the Director of U.S.–Korea Institute at the Johns Hopkins School of Advanced International Studies, introduced Jefferson students the reality of the Democratic People’s Republic of Korea (DPRK) and the history of its establishment based on his research experiences and travel to North Korea

“I contacted Dr. Jae Ku after hearing about his experience and expertise of DPRK affairs through words of mouth and research,” junior Christian Tae, one of the founders of HANK, said. “I thought he would provide excellent insight into the situation of DPRK and be able to educate the TJ community.”

Ku provided a brief overview of the impoverished state of the civilians in North Korea and the immense disparity between the different social groups in the country. Ku also described a multitude of difficulties the majority of the people faced, including starvation and famine, as well as his experiences during the travel to the country in 2012.

He also noted on the immense dichotomy between South and North Koreas due to the rapid economic growth in South Korea, which further accentuated the northern counterpart’s drawback.

“One thing that especially grabbed my attention was his experience in the DPRK,” Tae said. “I learned that much of what North Korea presents itself to tourists is a façade.”

The presentation was then followed by a question-and-answer session, in which the students were given the opportunity to ask more questions on DPRK as well as to connect the presentation to their academic studies. Senior Sarah Kook, one of the audience members, used the session to question the similarities between the dictators in DPRK and Rafael Trujillo, a previous Dominican Republic dictator featured in the book she was currently reading, “In the Times of the Butterflies.”

“From sources, I learned that North Korea has its own religion called Juche,” Kook said. “But after asking such questions, I realized that Juche is not only a religion, but also a political, economic and philosophical ideology that idolizes Kim Il Sung and his son.”

The officers of HANK hope that introducing various types of events and activities will achieve its goal of raising awareness of the realities of North Korea and the lack of human rights numerous civilians suffer.

“My involvement in HANK provides a way for me to provide help to the people who live under the most economically and socially repressive nations in the modern world,” Tae said. “It gives me an opportunity to educate the TJ community about DPRK current events that are relevant to the global society we live in.”