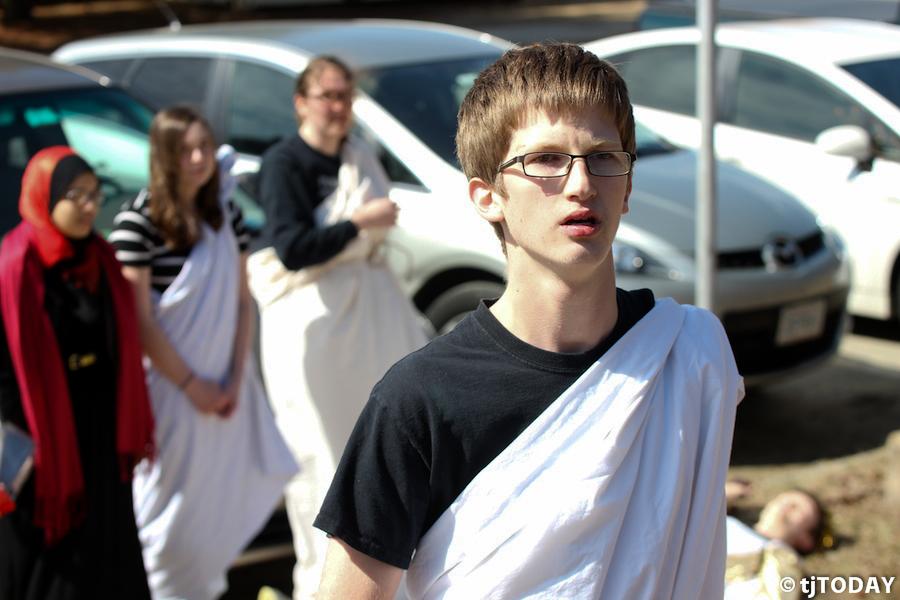 “Beware the Ides of March!” Jefferson Latin students dressed in black chanted as they paraded through the hallways behind the seniors, wearing togas, who represented Caesar, Brutus and other members of the Roman Senate. This annual commemoration of the Ides of March took place during lunch on March 14.

The performance reminds students of the assassination of Julius Caesar as a result of a conspiracy by many Roman senators who called themselves the Liberators. Caesar was the dictator of the Roman Republic at the time, having recently been declared dictator perpetuo by the Senate.
It was this declaration, however, that caused several senators to fear that Caesar wanted to overthrow the Senate in favor of tyranny and ultimately conspire to fatally stab Caesar on March 15, 44 B.C., which later became known as the Ides of March. Every year during the Ides of March, Latin students at Jefferson don black clothing for Caesar and meet in a predetermined location during lunch. They then march around the school until they crowd around a location outside of the building to watch a reenactment of Caesar’s assassination.

Reenacting the historical moment this year, seniors Andrew Coffee, Emma Hastings, and John Wilkes portrayed Caesar, Brutus and Mark Anthony, respectively, in an attempt to effectively capture the moment, ending with the death of Caesar and an impassioned speech by Antony. Concluding with red Twizzlers, which symbolized the blood that Caesar spilled, being thrown to the students witnessing the event, the performance was a brilliant and lively way to celebrate the death of the ruthless dictator.

“From a classical standpoint, everyone, including myself loves that speech,” said Wilkes, referring to his diction of the famous Roman speech. “The iconic phrase ‘Friends, Romans, Countrymen’ along with Mark Anthony’s sarcastic repetition of Brutus being an honorable man makes the speech engaging and entertaining.”

Many students across all grades, even those who had witnessed the performance before, were thrilled by this year’s installment in the ongoing Jefferson tradition and are looking forward to making the performance even better next year.

“Next year, I think TJ Latin is really going to work on publicity for the National Junior Classical League. We work hard to reach out to the community and we want to increase our outreach for specifically Ides of March improvements next year,” Wilkes said. “It will be difficult because the construction makes planning the procession hard, but we hope to find Dr. Glazer and chant.”

The Latin tradition of the Ides of March will continue in the coming years and will remain one of the most anticipated moments for every Latin student. Each year, it is this performance that unites the Latin students across all grades and allows them to express their love for the language and culture in a performance signifying one of the most important events in world history.

“I’m really looking forward to it next year because in AP Latin, I will be reading lots of Caesar’s literature,” said junior Anant Das. “And as a senior, I may have the opportunity to be in the reenactment of his death, which would be both a great honor and a lot of fun.”

Check out the photos of the event, taken by Sandy Cho!