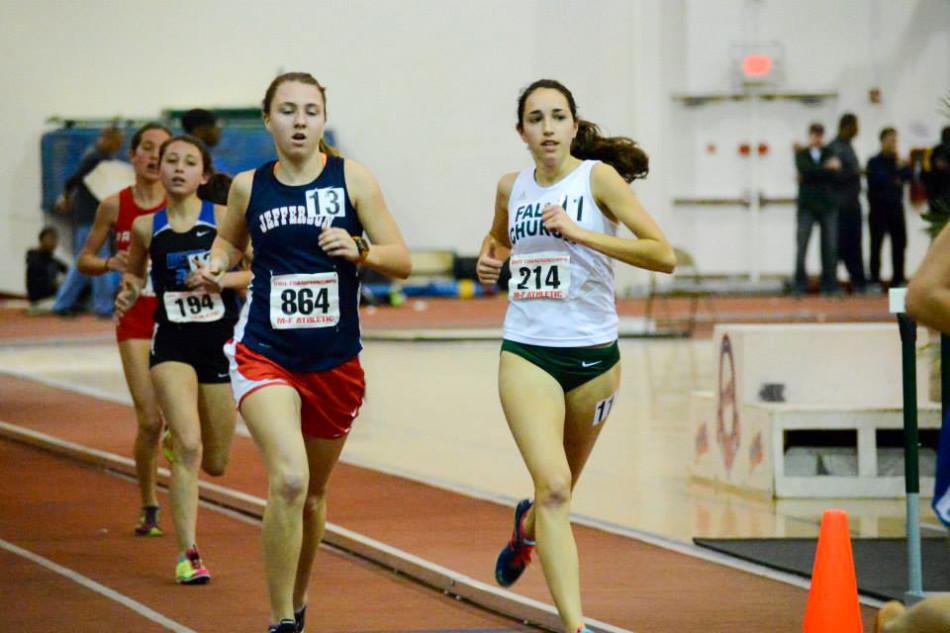 In the week leading up to the biggest cultural event of the year, the air was filled with barely-contained excitement. However, while the majority of the Jefferson community was preparing for International Night (I-Nite) , members of the winter track team were getting ready for the last meet of the season: the 5A State Indoor Track and Field Championships.

The state meet was held Feb. 27 – March 1 at the Boo Williams Sportsplex in Hampton, Va., and a total of 23 runners from Jefferson competed at the meet. The girls’ team placed 17th out of 37 teams, while the boys’ team finished 32nd out of 34.

Despite less-than-ideal conditions before and during the race, several athletes set new personal records (PRs), and some even medaled, earning All-State honors by placing in the top six of their race. Senior Jamie Simon ran an excellent race, placing sixth in the 3200-meter run between participating in two I-Nite performances.

“I went into the race without as much sleep as I would have liked, and general preparation was lacking,” Simon said. “States is really more of an individual meet, so my hopes and dreams with respect for the team were really just for people to score well in their particular events.”

The girls’ 4×800 relay, comprised of senior Grace Zeng and juniors Katrina Junta, Kate Salamido and Haley Stumvoll, did not go into their race with high expectations either, but they managed to finish fifth, earning All-State honors.

“We were ranked eighth in the state, which made us the slowest seeded team in our heat,” Salamido said. “Based on seed times, getting sixth place or better would be really tight, but that was our goal. We got All-State, and Haley and I both got PRs, so that was awesome.”

Sophomore Claire Dong also scored points for the team by placing eighth in the 55-meter hurdles and Zeng finished fifth in the 1000-meter run. Stumvoll finished seventh in the 3200-meter run, just missing qualifying for All-State honors but setting an outstanding PR of 18 seconds.

Now that the winter season has come to a satisfying conclusion, the athletes are setting their sights on the spring season, which has just begun. Time trials for new and returning runners will be held next week.

“In spring track, I want to break 4:25 in the mile,” Simon said. “As a boys’ team, we’d like to dominate the 3200 at Districts like we did last year; we should be able to get at least six or seven guys to qualify.”

For many, this will be the culmination of a year’s worth of training, and the girls’ distance team is also looking forward to advancing to the next level.

“For the spring, I would like to get All-State again in the 4×800, and also qualify a distance medley relay (DMR) for the Penn Relays,” Salamido said, referring to the prestigious national meet held at the University of Pennsylvania in April. “The latter goal may be a bit of a reach, but we will see!”