Spring sports struggle with the weather 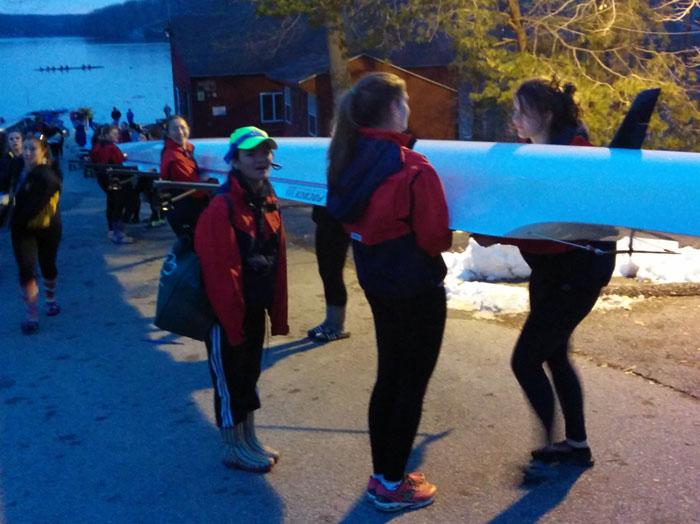 Crew practices on the water despite cold temperatures. Photo courtesy of Zoe Wang

With the Winter Sports Banquet marking the official end of the winter season, spring sports should be in full swing. But the equipment is untouched, the fields are a mess and outdoor sports can be found practicing in the gyms.

Lacrosse has yet to practice on their field, and instead is doing workouts and throwing drills in the gym.

“We don’t have a lot of room in the gym so we can’t do a lot of drills or practice shooting, and we have to keep it low contact, so we’re at a disadvantage to teams with turf fields who have been outside the past two weeks,” junior Julian Villacorta said.

Girls’ soccer is also having difficulties due to being forced indoors. Their setbacks are so major that they haven’t finished tryouts.

“As a result of all the snow, the field where we practice has been closed, so we’ve had to go indoors, in the gym,” girls’ soccer captain senior Katie Valery said. “Indoor soccer versus outdoor soccer is very different, almost a completely different sport, and a week of when we were supposed to be choosing players was indoor. We were picking an indoor team for outdoor soccer and it wasn’t working, so we’re waiting until we have outdoor practices before we officially pick the team.”

Crew faces different issues. Although they are able to go to the river, sheets of ice force them to do physical training rather than rowing. And even when they are able to get on the boats, the temperatures on the water chill the athletes.

“Land training is important for conditioning, but being on the river is important too because we really have to work on rowing technique and synchronization,” junior Zoe Wang said.