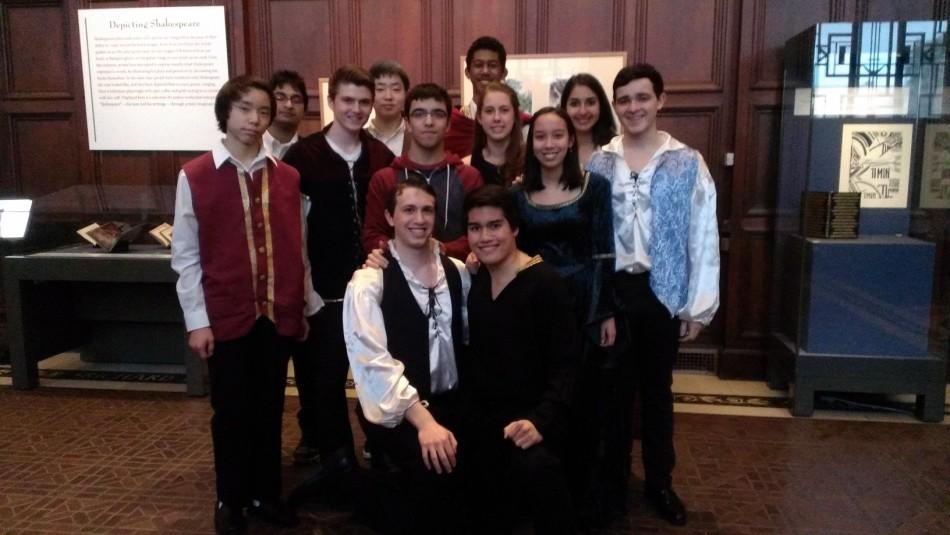 The cast and directors at the Folger Shakespeare Library. Photo courtesy of Natasha Shukla.

As part of their yearly tradition, Jefferson’s Shakespeare Troupe (TJST) performed at the Secondary School Shakespeare Festival on March 7 at the Folger Shakespeare Library in Washington, D.C.  TJST performed an abridged version of Othello, directed by senior Daniel Sainati and junior Mikaela Ruiz-Ramon.

“When I heard Shakespeare Troupe was going to be working on a new show, I decided to audition, and I’m really glad I did,” freshman Natasha Shukla, who played Bianca, said.

In between performances, the Mistress of the Revels holds improv and trivia games with both student and teacher participants taking part.  New for the 2014 festival, a buddy school system was set up, increasing mingling of students by encouraging online interaction and eating lunch together.

“I’ve been a part of Shakespeare Troupe since freshman year and have acted or participated in every show since sophomore year, so it was natural to do Othello” senior Liesl Jaeger, who played Desdemona, said.  “ I love having rehearsals with everyone in Shakespeare Troupe because we can be serious and hard working at one moment and then goof off for a couple minutes.”

At the end of the day, the Folger awards actors for their accomplishments.  Additionally, feedback on the shows is offered in an effort to encourage growth in acting ability as well as knowledge of Shakespeare, in a friendly and welcoming environment.

“Going to the Folger is absolutely amazing because there are so many other high school and middle school students who are interested in Shakespeare and acting and it creates this wonderful, supportive environment where everyone is free to enjoy each others’ shows and geek out about Shakespeare,” Jaeger said.