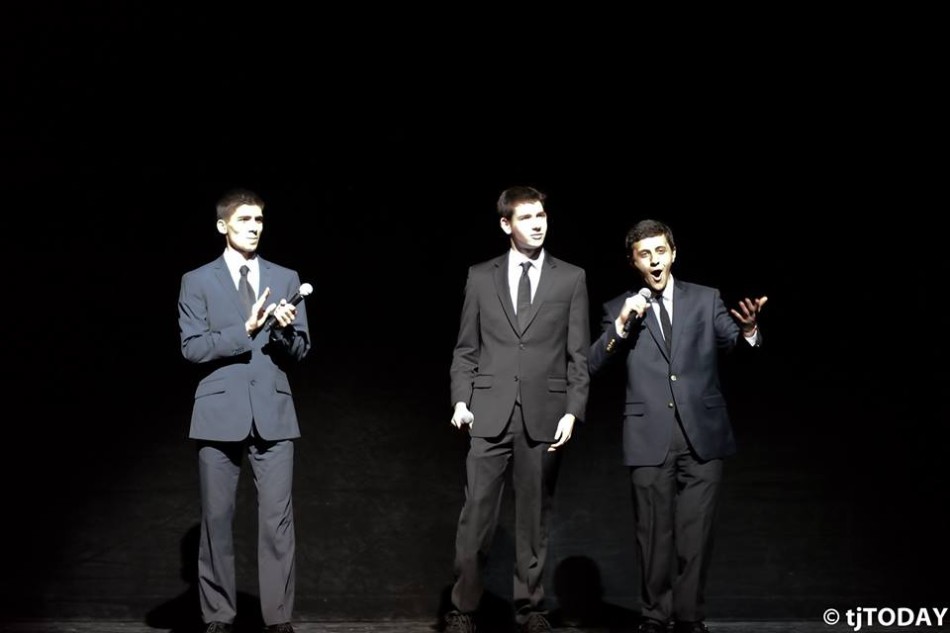 Seniors Zartosht Ahlers, Jacob Rosenblum and Anthony Skaff serve as the Masters of Ceremony at I-Nite 2014.

As one of the Masters of Ceremony for this year’s I-Nite, held on Feb. 28-Mar. 1, senior Zartosht Ahlers was able to have a unique experience. Along with fellow seniors Jacob Rosenblum and Anthony Skaff, Ahlers appeared on stage in between every act, cracking jokes about international culture, commenting on the Jefferson community and even performing in an act himself.

Q-and-A: On March 1, tjTODAY interviewed Ahlers on his I-Nite experience.

Q: Who and how were you approached to MC I-Nite?

A: I’m not sure if I quite remember, but Sarah Quettawala and I talked about it a while back. I had forgotten about it until she told me I was chosen to be MC.

Q: Had you participated in I-Nite before? Which acts?

A: I danced for Persian Club last year, but I was never very involved.

Q: Which acts did you participate in this year, and did you like performing or being an MC more?

A: I just performed with Persian Club, and I liked being an MC a bit more. I’m not very gifted in the dancing department, but I love hearing myself talk.

Q: What do you think makes I-Nite so special?

A: I-Nite is special because it highlights what makes the Jefferson community such an amazing one. The sense of unity across cultural lines and the sense of family is incredible.

Q: What is your favorite memory from this year’s I-Nite?

A: I was a big fan of the swing dance and I loved all of the Namaste dances. Every performance was fantastic, though.