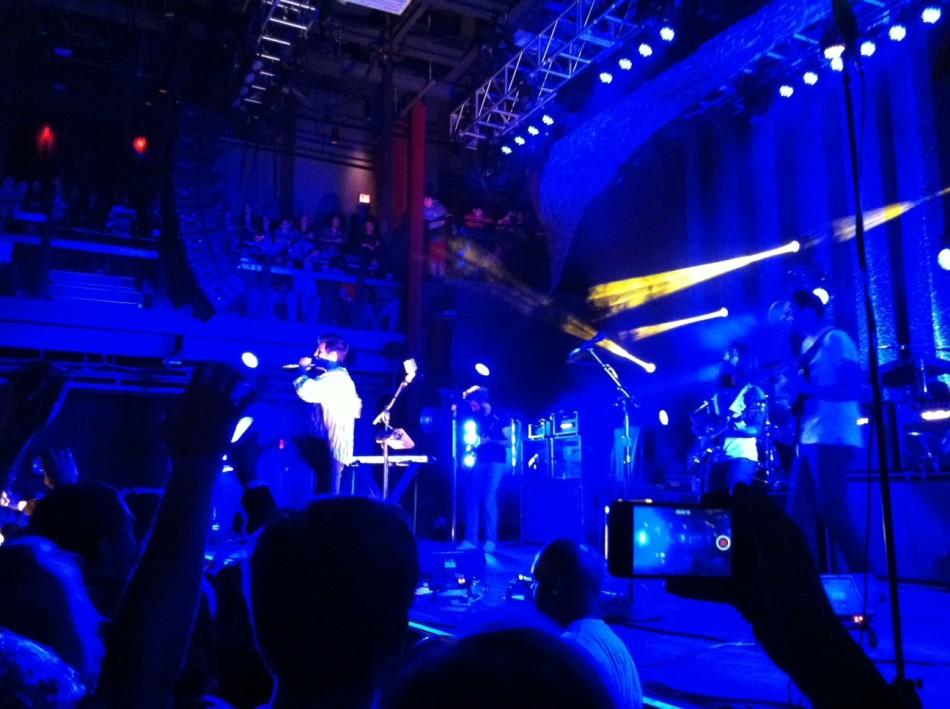 Sameer Gadhia, frontman of Young the Giant, performs songs off of the band's new album, "Mind Over Matter" on Feb. 23.

On the night of Feb. 23, tweens, teens and young adults alike lined up for blocks outside The Fillmore Silver Spring live music lounge to see a group of budding artists, Young the Giant. The concert, held in Silver Spring, Md., was just one of many performances across the nation in honor of the debut of their new album, “Mind Over Matter.”.

Young the Giant, consisting of members Eric Cannata, François Comtois, Payam Doostzadeh, Sameer Gadhia and Jacob Tilley is one of the few bands in existence that sounds better in concert than on a recorded tape. Gadhia’s vocals and stage presence, mixed in with ingeniously meaningful lyrics, give the band a distinctive sound that is unmistakable with any other indie band. The group defies the boundaries of genre while in concert, attracting people of all music tastes with songs from their stylistically different albums, “Mind Over Matter” and the original album “Young the Giant.”

The band, based out of Irvine, Ca. falls under the category of American indie rock. However with the release of “Mind Over Matter” on Jan. 21, the band has gained considerable popularity in the indie music world as well as the pop one. In fact, one of the band’s popular songs, “Cough Syrup,” has been played 18 million times on Spotify alone.

Packed into the general standing area of the Fillmore, spectators were able to watch frontman Gadhia begin the show with a song from the new album, “Anagram,” after listening to another American indie Pop group, Cayucas, open for the night.

Seemingly in a daze, perhaps fixed upon something beyond the line of sight of the audience, Gadhia delivered the song’s lyrics in a whole new way from what I had imagined while listening to the recorded audio. Each song appeared to have a true place in each of the band members’ hearts. Each lyric delivered by Gadhia was sincere and true, especially as he sang the more emotional songs off of the new album such as “Firelight” and “Camera.”

To conclude the night, the band played the ever-popular song “My Body” off of the album “Young the Giant,” much to the audience’s delight. Fans, invigorated by the upbeat melody and fast pace of the song, jumped to the beat of Comtois’ drums throughout the last piece and even shouted for an encore at the end of the performance.

Steadily gaining popularity and recognition, the band is a success story from the beginning. Gadhia, before the band’s creation, was a Stanford student studying Human Biology. However, unsure of his original plans to attend medical school, he dropped out to start a band called “The Jakes,” which eventually developed into “Young the Giant.” Ever since, the group has continued to garner attention from critics around the United States, and even had their song “Cough Syrup” performed by the cast of Fox’s “Glee.”

Seeing the group perform live was one of the richest concert experiences of my life. It was not only the sheer perfection of each song performed, but the style of indie rock portrayed by the band which made me enjoy the pieces so much. The group had such a unique sound that I did not have to come from a background of listening to indie Rock music in order to thoroughly enjoy each song.