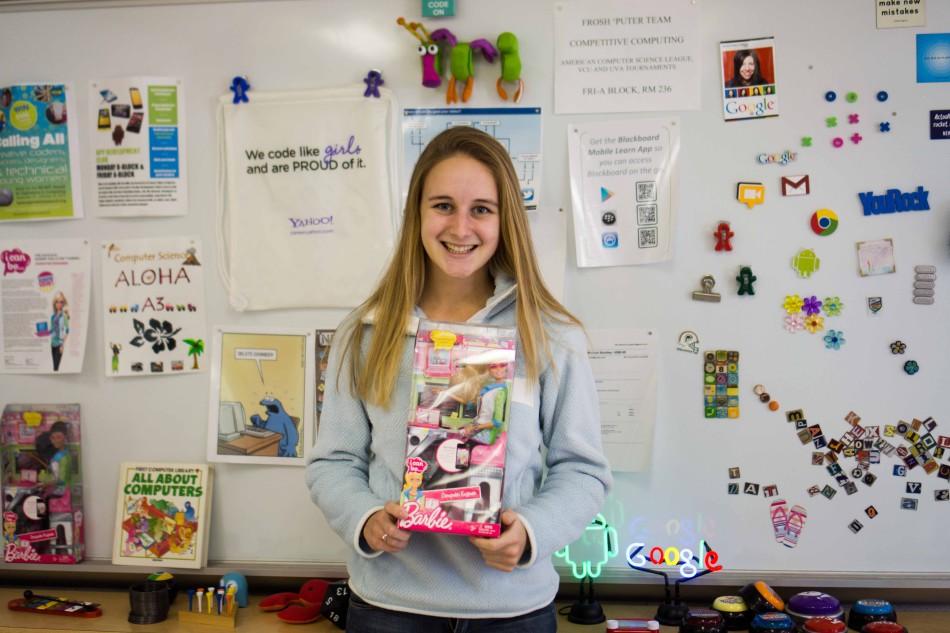 Junior Maddie Zug devotes much of her time to promoting interest in computer science for youths, females and the Jefferson population.

When junior Maddie Zug stepped foot into her hotel in Mountain View, CA, she couldn’t help but smile when she saw the friendly faces of her fellow Google trailblazers. Although she had never met the other students or mentors in person, weeks of online communication had left Zug feeling very much part of a close-knit family.

Now that she had finally arrived at her destination, Zug easily slipped into conversation with her friends, marveling at the smooth transition from talking on Google Hangouts to building friendships in real life. As they boarded the double-decker buses to Google headquarters, Zug felt at home, certain that this adventure into the heart of computer science (CS) would have a long-lasting impact on her life.

Zug’s selection to be a member of the prestigious Google Trailblazer program is a testament to her dedication for CS, which has been a lifelong passion of hers. Zug’s interest was first sparked in elementary school, when she became fascinated by the interactivity of building and programming robots.

Since then, Zug has been heavily involved in all things CS-related. Other than brainstorming ways to address the lack of global CS education at the Google Trailblazer Summit, Zug was also a national runner-up for the National Center for Women & Information Technology’s (NCWIT) Aspirations in Computing contest.

“Winning an award has connected me with a network of incredible young women who are also interested in computer science, and I have learned so much from them,” Zug said.

At Jefferson, some students – especially females – are hesitant to delve into the world of CS due to the plethora of stereotypes surrounding the field. During Computer Science Education Week (CSED Week) in December, Zug spearheaded the campaign for fomenting interest in and striking down misconceptions associated with CS. Among other activities, Zug and her team painted the J-Lounge wall in honor of CSED Week and hosted trivia contests, guest speakers and a scavenger hunt.

Zug is especially motivated to encourage female participation due to the obstacles that she herself has faced in becoming a successful female coder.

“The biggest challenge I’ve faced in CS is the general assumption that I can’t be as successful as the boys in my classes,” Zug said. “It has been hard to build self-confidence in CS, but it has really helped me to connect with other women that have been in the same position and have used CS to do meaningful things in their lives.”

Zug has also taken the initiative to start a new eighth period club specifically for female coders: the Coding Lady Colonials (CLC). The club’s leaders are currently hosting planning sessions during lunch until the CLC can begin meeting during Wednesday eighth periods. Once the club is up and running, its members will engage in activities such as learning Facebook application programming interface (API) and doing CS-related community service.

Zug has also worked in CS outreach over the summer, when she taught middle school students at an app development camp.

“App development is a great way to get involved in CS because it gets you thinking about how much creativity is put into making your everyday technology,” Zug said. “It shows you that even with just a little coding knowledge you can make exciting apps and put them on your phone in seconds.”

Zug will be one of the first to take Mobile and Web Application Development, the new senior research laboratory that will be inaugurated in the 2014-2015 school year. Although she does not have concrete plans for her future beyond Jefferson, Zug is confident that CS will always be a part of her life.

“The most important thing that I have learned from being involved in CS is that coding is an extremely important skill to have in our world,” Zug said. “I can make a huge impact on the lives of others with CS, and I have found something that I am really passionate about learning about and doing. It’s a great life skill to have, even if I don’t become a software engineer.”

Originally published in the Feb. 14 print issue of tjTODAY.