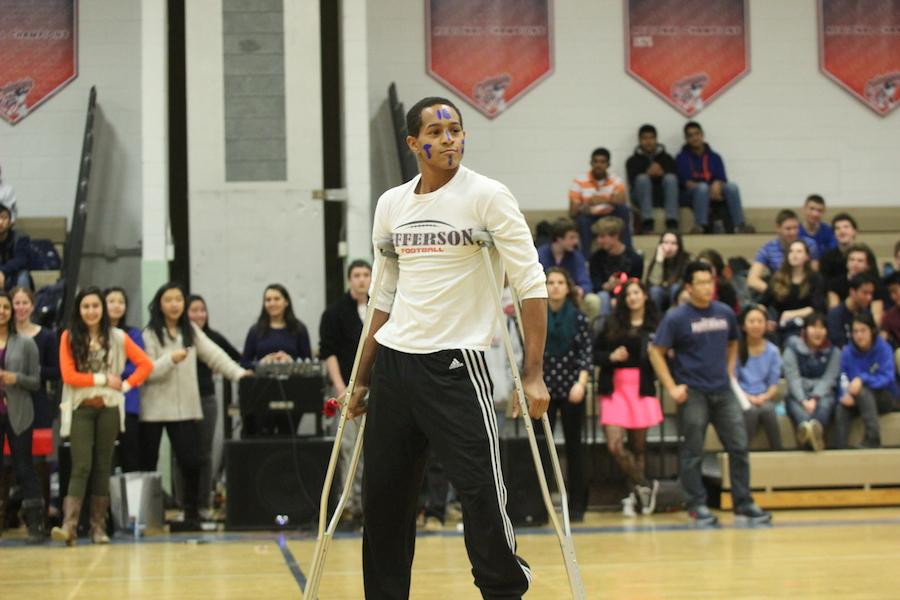 Sophomore Connor Jones is the sophomores' candidate for Mr. Colonial, which was held during the winter pep rally on Feb. 17.

Students across all grades gathered in the gymnasium on Feb. 17 during eighth period to witness the school’s annual winter pep rally with the traditional Mr. Colonial competition. By celebrating the end of the winter sports season and participating in a friendly contest, Jefferson students had the chance to enjoy themselves and reflect on the past season.

“I thought we had a good turnout from all of the classes, and it was exciting to see the Mr. Colonial competition,” junior Alexis Jenkins said. “I was a little disappointed that the wrestling team couldn’t make it, but I’m sure they were doing really well in their regional competition.”

As each sport was announced, team members emerged into the cheering gymnasium, throwing candy at the audience as their names were announced on the microphone. Athletes were pleased to celebrate their successful seasons with the rest of the school.

“I always like to do my walk around the gym with my teammates,” senior Eric Xie said. “It’s a small act, but I think the whole event brings the team together in our post-season, and it was fun to root for Floyd as our Mr. Colonial competitor.”

Quickly following was the contest for Mr. Colonial, which included three rounds: special talent, thought-provoking question and colonial fashion. The winning class with the best ranking in the three rounds and in class attendance and spirit, according to the pageant’s judges, who were teachers, received $250.

For the first task, freshman Victor Galov recited a poem he had written. Due to an injury, sophomore Connor Jones performed a gymnastics performance on his hands, rather than on his injured foot. Junior Nihar Gudiseva recited the entirety of Lin-Manuel Miranda’s Alexander Hamilton rap from memory and senior Floyd Baker shared his impressive talent of breaking apart apples while playing two recorders simultaneously.

For the second round, each contestant answered a question about relationships including what they look for in a girl, what a girl should look for in a boy, a dream date and the perfect proposal. With a spontaneous proposal by Baker to a fellow senior and a few small jokes from Gudiseva about his perfect date, these questions earned many laughs from the audience.

“I was very nervous,” Galov said. “My knees were weak and I had butterflies in my stomach, but I did have fun and it was an awesome experience for me.”

For colonial fashion, Galov emerged in his suit while Jones came out in a Jefferson football merchandise and a blue “16 TJ” painted on his face. Gudiseva appeared with blue face paint and a variety of colonial attire, but Baker won the audience’s approval in his many layers of Jefferson apparel including physical education shorts and a T-shirt and a crew uni.

“I really just wanted to have fun and enjoy the experience of competing for the love of my school,” Jones said. “It was a very fun experience and I was glad I could take part in it.”

The judges reflected on these three rounds and with certainty announced Baker as the winner, causing the senior class to burst into cheers as they were awarded the prize and Baker the title of Mr. Colonial.

“In the end I was honored to accept this task as the representative for the seniors, and winning was simply the reward to my class for the support that they have provided to me throughout these many arduous years,” Baker said. “It was breathtaking to be selected over the other candidates, and the individual honor was merely an added bonus to bringing pride to my class—the icing on the cake—but it was the least I could do for the fantastic individuals in the class of 2014.”

Check out the gallery for more pictures!