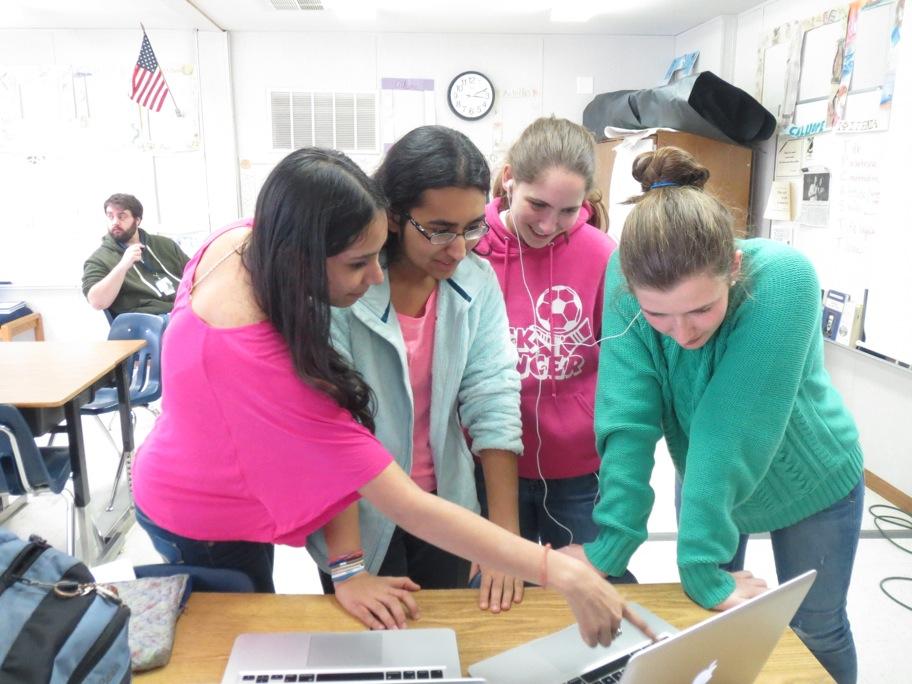 Members of the Future Energy Action Team (FEAT) discuss plans for the club, which meets every Monday eighth period during B-block.

One of the newest eighth period clubs to emerge at Jefferson, Future Energy Action Team (FEAT) is taking its first step of promoting students to participate in resolving prevailing issues around the world.

The club, founded by sophomores Abha Agrawal and Maya Pabilonia, plans to incorporate various technological mediums of communication, such as social media and web applications, to address global issues.

“The issues can range from restoring the Chesapeake Bay and global warming to improving the education systems in Virginia and Washington, D.C.,” Agrawal said. “The purpose of FEAT is to spread awareness of both local and global issues to the TJ and local community.”

Agrawal, who has been an advocate of preserving the environment since elementary school, was motivated to establish the club and introduce opportunities for Jefferson students to engage in community service through the use of technology.

“Some of the activities that we are planning to do are creating videos and websites as well as regularly posting on Facebook, Twitter and Tumblr,” Agrawal said. “We are also planning to create a week-long event at TJ where students participate in a friendly competition of finding a person with the smallest carbon footprint.”

FEAT hopes that its members and the Jefferson community become more cognizant of the severity and magnitude of the ongoing issues around the world and gain a genuine motivation to offer solutions to the problems.

“I have always wanted to both help the community and inspire others to do so as well,” Agrawal said. “I hope that this club will be able to achieve both of the aspects.”