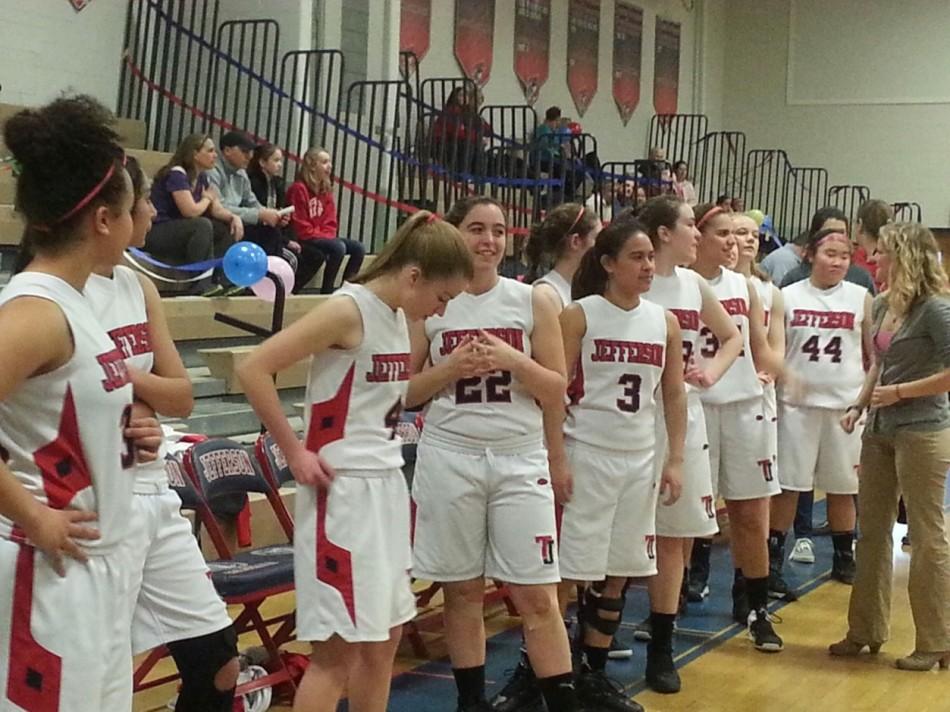 The varsity players in the Jefferson girls' basketball team prepares for the game against Stuart High School after the senior night.

Due to a sudden school closure on Feb. 14, the date of the game was shifted to the next day. Nevertheless, a crowd of parents and peers showed up at Jefferson to cheer for the team’s last game of their regular season and acknowledge all the senior players who devoted their time to participate in the sport.

“I loved this team,” senior Care Shoaibi, a varsity player, said. “It is a great group of girls, and we all get along.”

The varsity game began with a strong start by the Jefferson team, and their momentum carried them through through the end. The game ended with the final score of 44-24, a win that added to their previous eight victories of the season. In addition, the junior varsity (JV) team also showed great success in their last game of the season, winning against Stuart High School with the score of 28-25.

“I really liked our JV team this year and the people on the team,” sophomore Asha Krishnakumar said. “We were a very functional team, and the team spirit days brought us closer to each other.”

The varsity team ended its season with nine win and 13 losses, while the JV team ended with three wins and 13 losses. The end of the season also marked the end of the enduring journey of all the senior players who have committed their time and passion into the sport. Amidst the rigorous academic demands at Jefferson, the unfaltering enthusiasm of the members in the team looks forward to more a more successful season next year.

“Basketball season is tough because it is long and during an academically tough part of the school year,” Shoaibi said. “However, I got through it because of my teammates.”