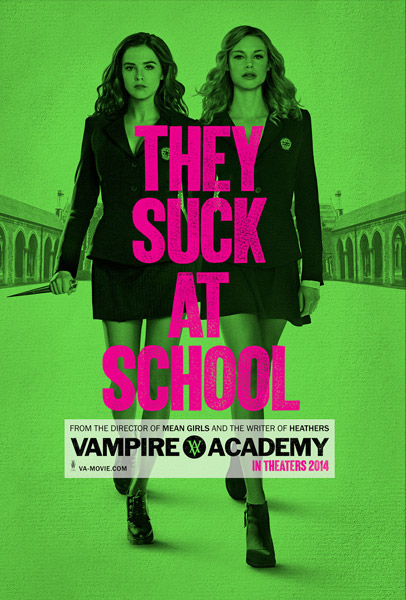 Deep in the mountains of Montana, there is a school. Rose Hathaway and her best friend Vasilia Dragomir have been on the run from this school for over a year. But what are they running from, and why?

The new movie “Vampire Academy” was released on Feb. 7. Based off of the book by Richelle Mead, and directed by Mark Waters, director of pop culture icon “Mean Girls,” “Vampire Academy” is a high school drama with a twist: the students are all vampires.

Fans of the book series by Mead will appreciate the extent to which the movie sticks to the plot of the book. Most of the dialogue is the same, the plot was followed almost exactly, and the characters match book descriptions to a tee. This should have been great, because Mead’s characters were well-developed, her premise was good, and her plot was solid.

However, the book may have been followed too closely. The book was written in first person, and the movie has narration by that character throughout the movie. Unfortunately, the narration is cheesy and forced, and there is no real motive behind it. Additionally, during admittedly necessary background about the world that Mead created, with three types of vampires and a complex social hierarchy, there were parts where the movie would cut out from the actual scene transpiring to go to an image with some narration, and all of the look and feel of a Powerpoint slideshow.

Unfortunately, the acting could not make up for this. Zoey Deutsch was weak as protagonist Rose Hathaway, and had no chemistry with her love interest Dimitri Belikov, played by Danila Kozlovsky, who seemed stiff and forced throughout. Lucy Fry as Rose’s best friend Vasilisa Dragomir was better, but still had weak moments.

By far the best acting and characterization in the movie was Dominic Sherwood as Christian Ozera, Vasilisa’s love interest. He played the part of the rebellious outcast perfectly and enticed the audience with his aura of mystery and “bad boy” attitude, exactly how readers of Mead’s books felt about Christian.

Although the premise could have been great, the execution and acting of the movie kept it from reaching its full potential. The weakness of some of the main characters and pointless narration and backstory were almost comical to watch—but not in a good way.