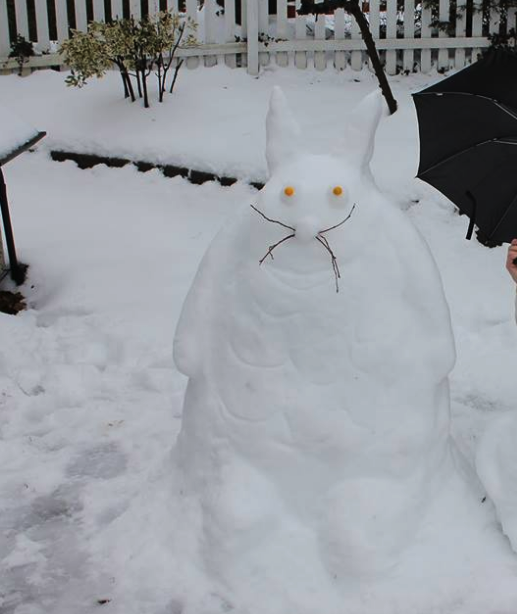 Bain, like many other Jefferson students, ventured out into the snow to build a snowman rather than go out on Valentine's Day.

On Valentine’s Day, Feb. 14, Fairfax County Public Schools (FCPS) announced that school would be cancelled for the day, and for good reason. After the near foot of snow, which collected around Fairfax County, a couple more inches fell in the evening of Feb. 13 in many places around the area.

Because of this, many Valentine’s plans of Jefferson students were limited or even cancelled, seeing as many of the plans revolved around the Senior Night Basketball game and Rob the Cradle (RTC) Fundraising event hosted by the class of 2015.

“The snow cancelled RTC,” sophomore Juliana Bain said. “So instead, I went outside and built a snowman.”

In fact, many others followed in Bain’s footsteps on Feb. 14, uploading pictures to Facebook and Twitter of their adventures building snowmen as well as different characters from Disney’s recent animation, “Frozen.”

The Rob the Cradle event was officially cancelled due to the bad weather, although asking week for RTC has been extended to Feb. 19. The Senior Night Basketball games have been rescheduled for Feb. 15.

“Because our class just has so many fundraisers planned for this year the Pi-Miler is coming up, we probably will not be rescheduling the RTC Menchie’s fundraiser anytime soon,” junior Anant Das, the 2015 class president, said.

Other Jefferson students take a different outlook on how Valentine’s Day was affected by the snowstorm which cancelled RTC.

“I was going to go to school and be lonely,” sophomore Karl Keat said. “Instead, I stayed at home and was lonely.”