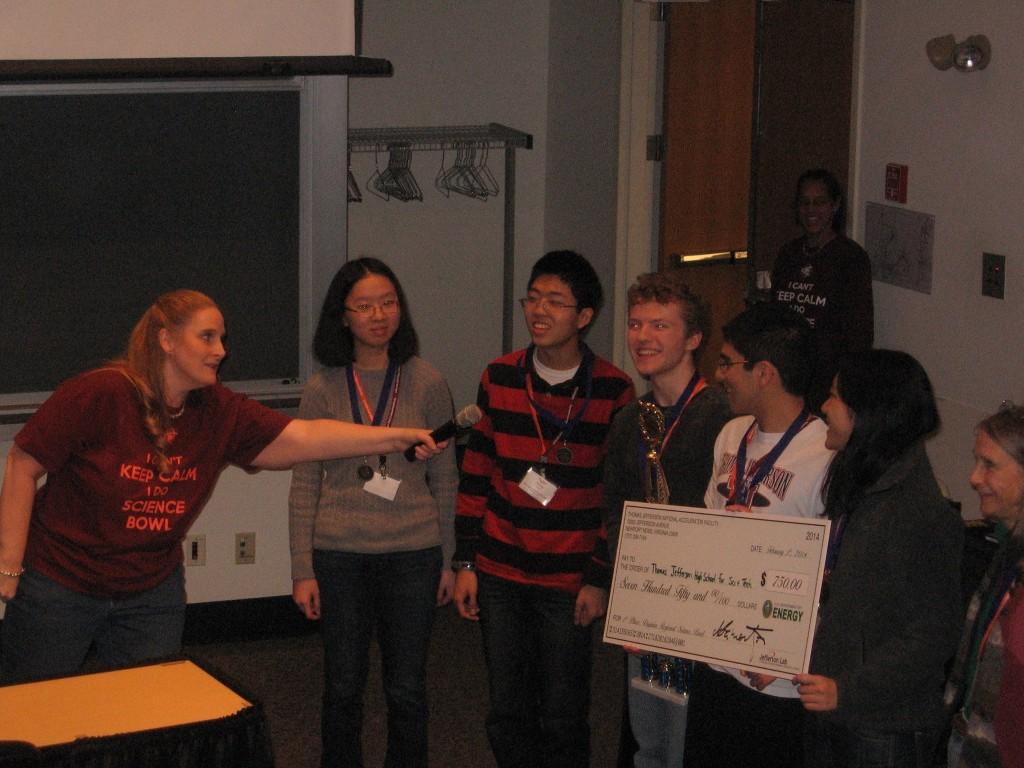 The Jefferson Science Bowl won first place at their regional competition on February 1, receiving not only a trophy but also $750 for Jefferson and medals for each of the members. The winning team consisted of sophomores Ross Dempsey and Tiger Zhang, juniors Matthew Barbano and Janice Ong and senior Victoria Xia.

Science Bowl is a competition hosted by the U.S. Department of Energy for middle and high school students interested in all areas of science. Students participate in high-intensity question and answer rounds in the topics of biology, chemistry, Earth/Space science, physics, energy, and math.

They competed against 22 other high schools at the Thomas Jefferson National Accelerator Facility (Jefferson Lab).

“Competing against the other high schools wasn’t as stressful as it sounds; it was actually pretty fun,” said team captain,” Ong said. “There were high school students from around the whole state who enjoy science too, who were very interesting people in general.”

The team had a specialized approach to studying for the competition. They had many study sessions during lunch, 8th period and after school to prepare for the Bowl. Since there are many different areas tested, each student specialized in one area to maximize the number of questions they were able to answer correctly. The last section, Earth science, was their weakest, so they studied for that subject as a group.

As for individual study, each student prepared differently, some by studying material in textbooks, others by reviewing different websites, but they all brought their passion for science into their studying techniques.

“We are all interested in science subjects – a big part of preparation is having the motivation to want to actively learn the subject, regardless of whether there is a competition or not,” Ong said.

The team will be traveling to Washington D.C. in late April to compete in the National Science Bowl.

“It is a privilege to have the opportunity to go to Nationals. I think it will be a fun and interesting experience,” Barbano said.