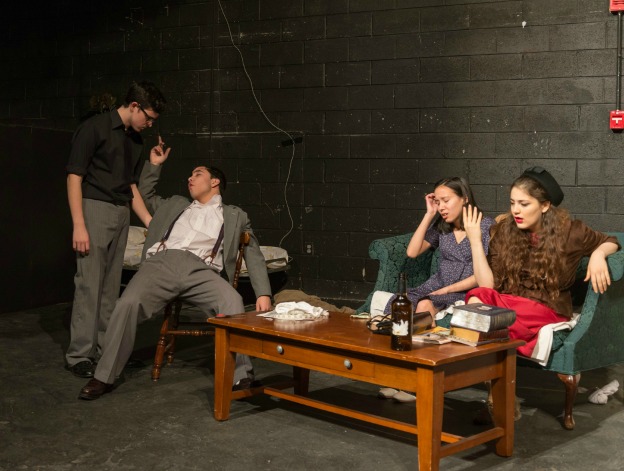 Members of Jefferson’s theater department performed their winter play, “A Taste of Honey,” on Feb. 7-8. The play, written by British playwright Shelagh Delaney in 1958, focuses on the life of a teenage working class girl named Jo, and her relationships with her crude mother, her mother’s horrible new boyfriend Peter, her lover Jimmy and her new friend, Geof. The production featured only five cast members on stage, with several students working behind-the-scenes or for the tech departments.

“It was really strange, having such a small cast. It also placed a huge burden on the cast members, because the play had so few characters that there was so much for everyone to memorize,” senior Jordan Goodson said. “But I think, with the cast being so small, as a group we learned how to work together and to trust each other to do our jobs and fix things that went wrong.”

Due to the intimate nature of the play and because of the lack of a blackbox theater at Jefferson, director Zach Roberts opted to have audience members seated in rows onstage, with the acting occurring only on a small section of the stage. However, this allowed for the stairs leading up to the catwalk to also be used by senior Anthony Carrington, who played Jimmy.

“The audience experience varied depending on seating location. I saw the show both nights and found the more enjoyable experience to be when I was sitting up front,” junior Gavin Moore said.

The Saturday night performance was designated as the Cappies show for the year, and over 60 students critics from the Cappies program attended the show to write reviews about the performance. The show will be eligible to receive award nominations for the Cappies Gala at the Kennedy Center in June.

“It’s not your typical high school play. There’s very little action; it’s all about the relationships between the characters. It’s intimate and introspective, which might not always capture the attention of the high school audience,” Goodson said. “But acting it was definitely a helpful learning experience because we got to work with heavier, more subtle material then we were used to.”