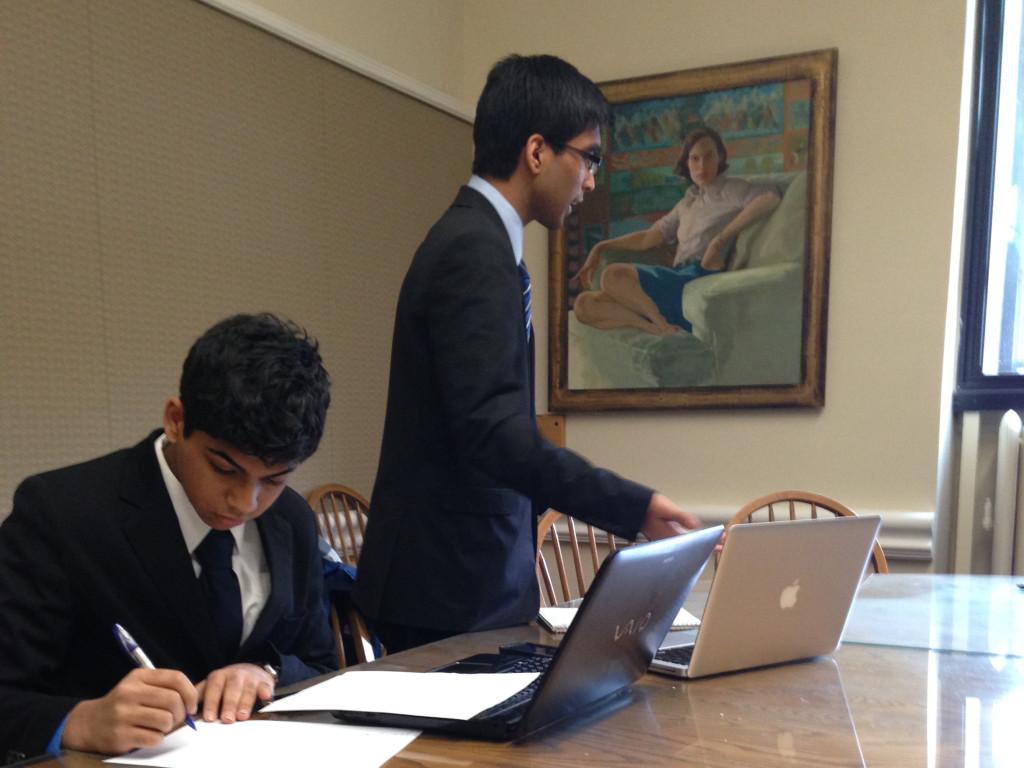 The students, accompanied by Forensics sponsor Marie Bakke and English teacher and Lincoln-Douglas sponsor Jennifer Seavey, left for New York on the morning of Jan. 24. A total of 14 students from the three teams attended the tournament.

Junior Shreyas Garg and sophomores Raksha Pothapragada, Taejas Srinivasan, Aneesh Reddy and Kaushik Venkatesh represented Jefferson’s Lincoln-Douglas debate team at the event. According to junior Siddarth Anand, the teaching coordinator, these members were selected based on their skill level and need for experience at the national circuit, among other factors.

“Our team’s goal was primarily to allow some of our younger and less experienced debaters to gain valuable experience at the national level,” Anand said. “We achieved this goal with flying colors. They competed against some of the best debaters in the country, and managed to belong to the elite group that cleared to elimination rounds.”

Garg and Reddy cleared the preliminary rounds and qualified for, or “broke” to, the next round.

For Jefferson’s Public Forum team, three pairs attended the invitational: junior Pegah Moradi and sophomore Rushi Shah, sophomores Hasan Ahmad and Jesse Cai and sophomores Dhruv Gupta and Srijith Poduval. Although the pairs did not bring home any awards, they viewed the tournament as an important learning experience.

“Since Columbia is a really elite tournament, we just wanted to go in and do our best, and come out with more experience and hopefully some wins,” Moradi, a teaching coordinator, said. “I’m really proud of how all three teams did at the tournament, and hopefully all teams came out learning more about debate and argumentation.”

Jefferson’s Forensics team was represented by senior Miranda Callahan and sophomores Matthew Sun and Virginia Sun. Matthew and Virginia broke to semifinals and quarterfinals, respectively; in the end, Matthew placed 10th in the Original Oratory category, while Virginia placed 19th.

“We didn’t have very defined goals,” Matthew said. “Since only three of us went, we were just hoping to break and we were surprised when two of us did.”

With their hotel’s convenient location in Times Square, the students had time to explore the area when they were not competing. The attractions that the teams visited included Freedom Tower, the 9/11 memorial at Ground Zero and specialty stores for M&Ms and Hershey’s.

The tournament was, overall, a success, with each team competing to the best of their abilities.

“I continue to be impressed with the drive, dedication and professionalism of the debaters,” Seavey said.

Returning home on the evening of Jan. 26, each participant had new insights to share from the experience.

“The tournament really helped me see a whole new side of debate,” Garg said. “Before Columbia, I had only been to regional tournaments, and Columbia is a national circuit tournament with a different style of debate. The level of difficulty was also much greater, which helped us improve.”