I-Nite Tickets sell out for performance at GMU 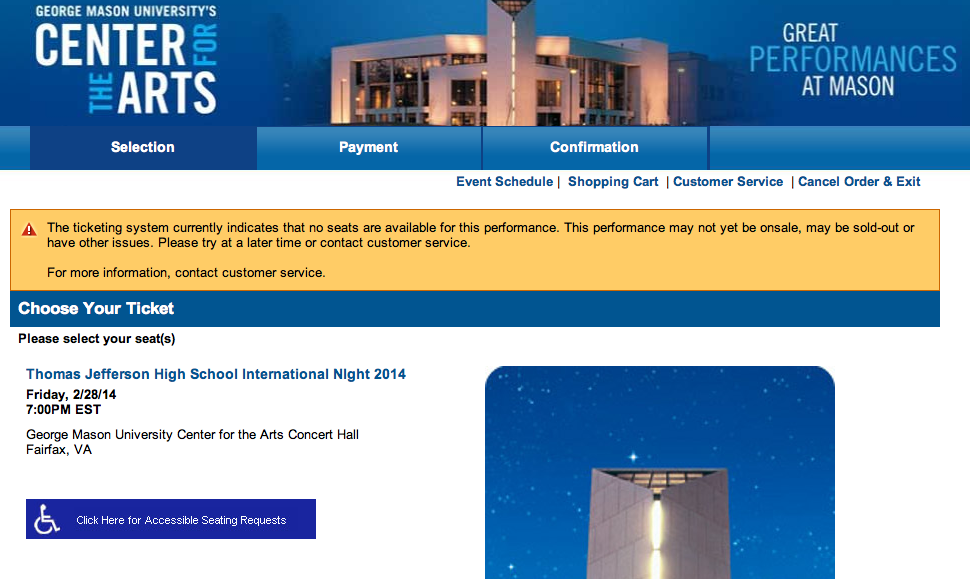 On Jan. 29, ticket sales for I-Nite began after an advertising campaign on social media. Unlike every previous year, this year, I-Nite is being preformed outside of Jefferson, at George Mason University (GMU). But despite all precautions, by the end of the night, GMU’s 1900 seats were sold out.

“We were looking for a higher capacity and to grow the strength of the I-Nite brand so to speak. There are still seniors that haven’t gotten an opportunity to watch I-Nite so we wanted to give them a chance to watch the biggest show at I-Nite. In the end, its all about the hype and the excitement that this builds for the TJ pride,” sophomore Dhruv Gupta, the webmaster of Namaste, said.

Another change from the policies of previous years was that this year, the tickets were sold at varying levels of cost for the GMU performance, depending on what part of the audience the buyer wanted to be in.

“I thought the decision to offer different prices was smart: people could choose whether they valued price or seat quality,” senior Sparsh Gupta said. “I also can’t wait to perform at a larger venue.”

The most notable difference, however, between this year’s sales and previous years was the fact that it was done entirely online, as opposed to during one lunch block at Jefferson.

“I think the online system was much more fair than previous years, since the start time wasn’t during lunch and there were no concerns about getting in line or leaving class early. It still goes to show how incredible the event is that the tickets were mostly sold out within a few minutes,” senior Robert Young said.

Preparation for the second performance of I-Nite has already begun, with the traditional venue of Jefferson in mind for March 1. For equity in ticket sales, specific plans are being discussed with the administration. The GMU performance will be on Feb. 28.

“I’m so incredibly excited to perform at GMU this year. I think being on that stage in front of two thousand people is ridiculous enough but on top of that we’re performing with friends and its our last year. It’s just that much better,” senior Soumya Mishra said.

Were you at I-Nite 2013? Check out 12 of our favorite moments from that performance!