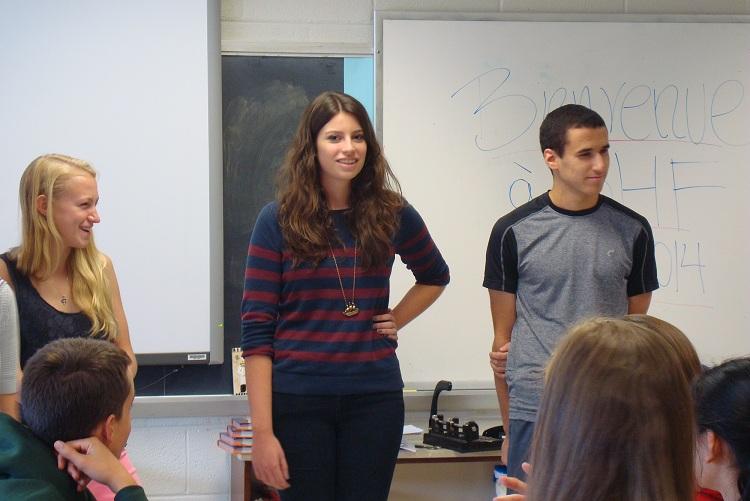 Senior Maria Psarakis welcomes current and new members of French Honor Society. Currently, the club is practicing for the upcoming I-Nite performance, in which the members learn the dances they hope to participate in.

As the biggest cultural night of Jefferson returns again for the school year, French Honor Society (FHS) is among the many cultural eighth period clubs that began holding dance practices for this year’s International-Nite (I-Nite).

FHS is an eighth period club for students who wish to engage more deeply in the Francophone culture. This year, interested members will be participating in the club’s I-Nite performance.

“The theme of the performance is a clash between French and American cultures, and the songs were chosen with the theme in mind,” junior Carolina Hatanpää, a FHS officer, said. “Our song choices include contemporary French songs as well as songs from the 1940s to show diversity in French music.”

Members of FHS will be able to participate in various sections of the performance, including the French and the American dances. During the previous meetings, the students have started practicing the French dance, which presents a unique dance routine of simple moves that require collaboration in the group.

“Practices are usually held during club meetings and some will be held during lunch,” Hatanpää said. “Monday eighth period meetings may also be used as practice time.”

Many new FHS members showed their interests on participating in this year’s performance. For some, the performance was their first exposure to performing in I-Nite.

“Last year, I was not a member of any clubs that participated in I-Nite,” sophomore Chantal Iosso said. “When I had the opportunity to do so this year, I took the chance.”

By participating in the I-Nite performance, the members of FHS hope to delve into French music while raising awareness of the fascinating aspects of French culture to the school community.

“I hope that the members of I-Nite have fun and decide to participate next year,” Hatanpää said. “It is definitely a great bonding experience.”