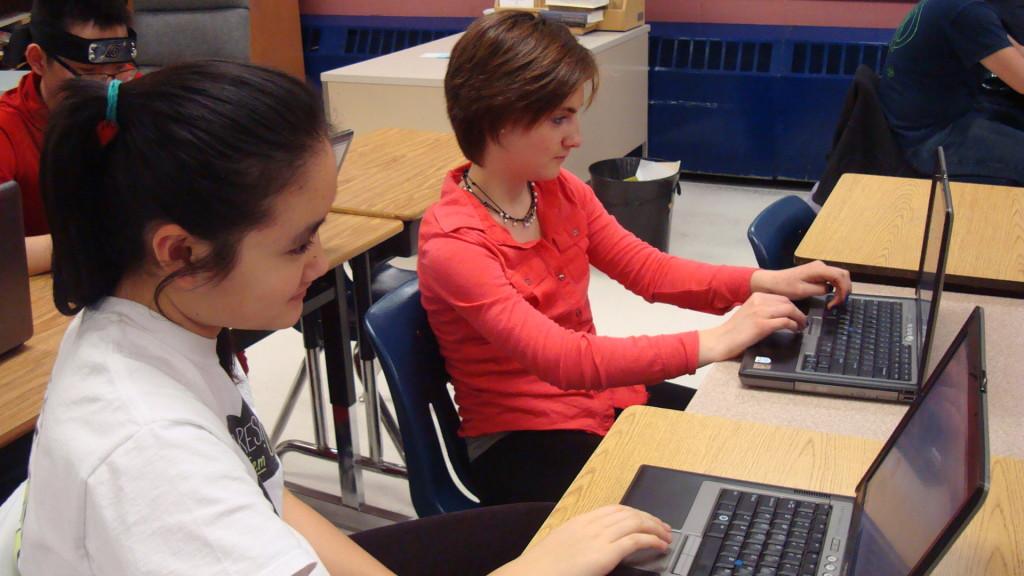 Sophomores Sherry Wang and Phoebe Whitmore participate in various activities, such as taking a survey, to learn more about child slavery.

“UNICEF’s mission is not only to fundraise and donate money, but also to educate and advocate children’s rights,” junior Nur Simsek, the president of UNICEF, said. “We thought that signing petitions does have an impact if enough people participate.”

During the meeting, students took a brief online survey that determined how many slaves worked to sustain their daily lives and produce their personal possessions. After the survey, students could also send a message to the companies that most influenced their lives.

“I thought that the slavery activity was eye-opening,” sophomore Ana Driscoll said. “We use so many things every day and don’t really think about where they actually come from.”

Afterwards, the students signed their names to support various petitions, including the Strengthening the Child Welfare Response to Trafficking Act, which was proposed in the United States Congress to protect children who were in danger of trafficking. The students also signed petitions that addressed concerns on enforcing child labor to produce cotton and electronics for prominent companies.

“When we hear about these problems concerning children, no matter how much we say we care, we do not feel a personal connection,” Simsek said. “Through this meeting, we realized that we are involved in all the problems we are trying to solve.”

By signing petitions, UNICEF directly engaged in the global effort to stop the continuing exploitation of children and adolescents, surpassing the local community service projects the club usually organizes during the year. Through the activity, the club hopes that its members discovered their proximity to these injustices and the significance of their support to terminate them.

“We hope that the students spread what they learned about child slavery and trafficking and know that every signature does make a difference,” Simsek said.